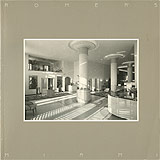 Romer's Miami chronicles Gleason Waite Romer's forty-year photographic career (1924-1964). Gifted by the photographer, his lifework was subsequently warehoused in the Miami-Dade Public Library. Gary Monroe was commissioned to organize a functioning archive from the photographer's 17,500 large format negatives, and to prepare the inaugural exhibition for the Library's new home at the downtown Cultural Center. The Romer Collection has become the center-point for interpreting Miami's visual past. This book, which Monroe wrote and edited, is the primary source about G. W. Romer.